Air conditioning systems have become quite an integral part of our day to day lives. And this is especially the case in all those places where the sun shines bright.

And as far as the convenience factor of air conditioners go, these are absolutely marvelous.

Flip the AC switch on and kiss the heat and humidity goodbye. On top of that, maintaining an optimum temperature and level of humidity is also very good for health.

Yet, all these great features are not going to be without their problems. And something like that could really buckle your air conditioner down.

The best way to go for that is going to be consistent air conditioner maintenance activities.

Where Most People Face the Main Issue with AC Maintenance

Most people are aware that a powerful device like an air conditioner requires regular maintenance.

But since most of them are busy, they entrust technicians to do all the heavy lifting for them. And in exchange for that, they have to spend good sums of money.

Now, even if maintaining an air conditioner isn’t the hardest thing in the world to do. It isn’t super easy either. And depending on various factors like the model of the AC, and service policies. The costs can vary within an upscale range.

Let’s work with some numbers here to give you a clearer idea of this.

Among the total number of AC owners throughout the world, 42% of them opt for regular maintenance from professional servicemen. And consider that to be about $150 a year per service contract.

If you are really busy and can afford that, then by all measures that’s a good idea.

But if you’re looking for ways to save money on air conditioning bills. Then you’ve come to the right article for that, as you’re going to get exactly that, more on it later.

To press on this point further, have a look at how much money do people from different countries spend.

And as a general rule of thumb, the necessity of air conditioners will be more in hotter places. The Tropics, Equatorial places and desert areas, basically you get the picture. Now, these are sort of objective stats and might or might not be the case for you, wherever you are.

Let’s check out the DIY measures for AC maintenance which can save you a lot of time and money.

6 Best Practices for the most Economic AC Maintenance Possible

Here I’m going to list 6 most effective ways you can slash your expenditure on AC maintenance.

As for all the things that you can do for this. There are just so many things depending on the model of AC you’re using. But these 6 are going to bring you the best results among them all.

And as such these have made their way on to this list.

Invest in an Automatic Thermostat

As you use your AC, you’ll be putting the miles on it, to take the analogy of automobiles.

But a lot of time, you’re not going to need that much cooling, or heating in some cases. So, if you change it to an optimum temperature at that point, you’d be taking some load off the system.

Doing this once or twice can be quite feasible, but not all the time.

To streamline this process, you can make use of an automatic thermostat. This is a very cool device and can do a lot for helping you get the best out of your AC.

You wouldn’t have to get up and change the temperature settings whenever there’s the need.

And in that process, you’re going to decrease the necessity for AC servicing.

By investing a hundred dollars or so, you’d be saving quite a bit in the long run. And get yourself a good one with top-notch precision.

Get some Fans Going

This is another way to take some more load off of your air conditioner. Because let’s face it, once the ambient temperature in your room is at a certain point. It’s going to stay like that for the most part.

So why keep your AC going all the time?

As you cool down your room using the AC, you can turn that off. And with the windows closed, if you turn on the fans up to the necessary speed.

What that’s going to do is circulate all the cool air around the room, thus maintaining a comfortable temperature throughout. This can be really effective during summers and is a practice that many people living in warmer areas adopt.

Try it, as you’d be thanking me later for this idea.

When it comes to an air conditioner that you’ve been using for quite some time. There are going to be functional components in it that bleed more power than they should. And some of them will do that to a substantially notable extent.

That is the reason ACs have power consumption ratings so that you know what you’re getting into. But such ratings can only be accurate to an extent, and whatever rating you have, is only going to get poorer with time.

Precisely because important components like the compressor, for example, loses efficiency. What could cost you 3000 kWh to 4000 kWh, can now go up to 5,000 kWh.

The best thing you can do here is to check for any parts like this. And once you can pinpoint it with full certainty, you can go ahead and replace that. Of course, it’s going to involve some service costs, but your main goal would be to identify the problem.

As after you know what is wrong and fix that up, you’ll be saving much from that point.

Mitigate the Effect of Heat Sources

If you have the air conditioner in a room that is close to the kitchen, then that’s a problem.

From kitchen implements like stoves, ovens and the like, a lot of heat disperses out of it. And that has a direct effect on the ambient temperature.

Now if you’re trying to keep a room cool, and it happens to be close to your kitchen. Then your air conditioner will be working extra hard to maintain that temperature. If it was far from the kitchen, then the same thing would’ve been a lot easier.

Ideally, you should avoid using the air conditioner in a room near the kitchen. But if it’s not possible, then let the heat dissipate away before you turn the AC on. It can take from about half an hour to one before the heat levels are oaky.

Try opening up the nearby windows as well to speed up the heat dissipation.

Properly Cover Up the Ducts

If you’re using a centralized air conditioning system, then there are going to be ducts to transfer all of that.

Lack of proper insulation over the ducts can lead to a lot of losses. This will badly affect the overall health of your AC over a certain period of time. More than that, performance is going to suffer quite a bit.

To prevent that from happening, you will have to insulate all the ducts properly. As if you do that, you’ll be able to minimize heat losses from those ducts.

Fabric and polyurethane are some of the best options to consider when choosing insulation material.

Keep the Use of Lighting Appliances to a Minimum

Just like the kitchen implements, lighting appliances pose the problem of overheating. But it’s going to be a bit different in the way it works.

As far as the heat from the oven goes, it peaks during the time of use, and that’s that.

But with the lighting in your home, a lot of them are going to be working throughout the day. And thus will have a slow but continuous effect of heat addition.

The effect on the performance of the air conditioner is going to be exactly similar.

So what’s the solution?

Simple. Just use the lights that you need and switch off the other ones. Not only will you be doing your AC a favor, but will save on the overall power bill as well.

As you meticulously implement these methods, you’re going to see a change in the bills immediately.

Then from there, you’ll notice that the costs for AC maintenance are going to go down. More than that, the performance of that device is going to be a lot better.

Also, with these practices, you will be able to run your AC for longer as well. 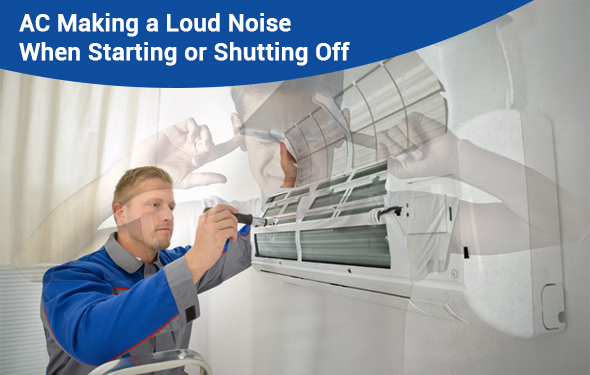 Why is My AC Making a Loud Noise When Starting or Shutting Off?